Currently third in line for the most U.S. breweries per capita, Colorado is becoming known as the state of craft beer.

Craft breweries have erupted in popularity among young and old adults because of the attention to detail, accessibility, and all around awesomeness.

Great beer makes for great times and not only is craft beer more flavorful than traditional brew, it’s typically more potent, more abundant, and more forgiving on the body because of quality over quantity. The culture shift from generic to craft disrupted the American beer market labeling big box products as flavorless, unappetizing and above all, watery.

Steamboat Springs is no novice to the craft beer game hosting a multitude of breweries that have made a name for themselves in the Yampa Valley as staples in apres ski or giving your taste buds a vacation of their own.

The following brewery guide serves as an introduction to what refreshing options await after a long day of play or planning a night out on the town.

This local legend of three years sticks to what they’re good at; exceptional beer in a calming atmosphere with top quality service. Storm Peak Brewing Company offers an elaborate beer menu with 20-ever rotating taps in flavors new and old available in pint glasses, flights, and refillable growlers.

Newly positioned on the West end of Steamboat Springs on the corner of Lincoln Ave and Elk River Road sits this beautifully redesigned brewery with ample mingle space, clear views into the brewing quarters, and fresh popcorn for snacking.

To get a taste of the magic outside of Steamboat Springs know that Storm Peak distributes several iconic flavors statewide, so keep a close eye next time you’re shopping around Colorado.

Off the beaten path and away from the crowds of main street Steamboat Springs resides a powerhouse in the realm of German and Belgian style beer; Butcherknife Brewing Company.

Butcherknife is located just a quarter mile up Elk River Road off of highway 40 nestled beneath rolling mountains along the North Routt countryside.Pleasant yeast scents fill the room and the display of local art will leave you in awe. The beer will have you craving for more and the stack of games let the entertainment last hours.

Butcherknife has a broad appeal that reaches far outside of Steamboat Springs given their strong distribution chain, but if you’re lucky enough to be in the neighborhood definitely stop in for a fulfilling brewery experience.

If it’s both food and drink you desire look no further because the king of happy hour has arrived. Mahogany Ridge Brewery and Grill is a popular Downtown Steamboat Springs choice in apres for good reasons.

During the 4:00-5:30pm happy hour parties can enjoy half-priced drafts alongside a $1 tapas menu that’s sure to delight. If it’s a late night treat you’re after, Mahogany offers half-priced beers and appetizers from 9:00-10:30 pm.

Mountain Tap’s head brewmaster has over twenty years of industry expertise and credentials under his belt. The head chef worked day and night to address a need in Steamboat’s marketplace – great pizza with even greater beer.

LOOKING FOR A PLACE TO REST EASY POST BREWERY TOUR?

Take a peak at our downtown lodging, the perfect location to lose yourself in a Steamboat night out. 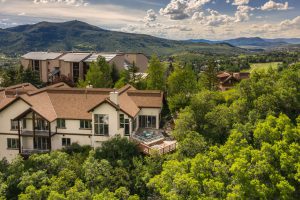